While fighting a rare melanoma that has cost him his right eye, Gulf War veteran Thomas “Tomo” Riley of Hastings, MN, sometimes tapes a paper target with the word “c-a-n-c-e-r” scrawled in black ink to a backdrop in his garage. Then he takes aim with the laser sight on his Airsoft Machine Gun. As he opens fire, Tomo says, “You think you got me? You ain’t got me, man. I got you.”

Killing cancer is helping Tomo heal. “Cancer is one nasty animal,” he said. “Not everybody is going to win. But you have to keep that positive attitude, and tell yourself every day, ‘I am going to beat this. There is no way that I am going to succumb to this.’” Tomo said he has promised himself that he will not die from cancer: “That’s a promise I intend to keep.”

But cancer has put him through hell, starting one morning in February 2016, when Tomo woke up at 2:30 a.m. with his eye bulging out of its socket.

“I woke [my wife] Patty up in the middle of the night and ended up going up to the ER,” Tomo said. “That day changed everything for us.”

As his diagnosis was confirmed and aggressive treatment launched, Tomo had to take medical leave from his job as an installation and service technician for a satellite TV company.

Bills started piling up as he and Patty worked with the Department of Veterans Affairs to prove that Tomo’s cancer is linked to his service in the U.S. Navy, during Operation Desert Storm/Desert Shield.

In July 2016, it was determined that Tomo suffers from Gulf War Illness, a multi-symptom disease related to exposure to nerve gas. His eligibility for VA benefits was approved.

Patty wrote on Tomo’s CaringBridge website: “The VA will be giving him compensation for the rest of his life … We are both so relieved that one battle in this fight has ended, and we will now be able to focus all of our energy and prayers on the battle with this disease.”

The battle continues, with Tomo recovering after surgery in February 2017 to remove his cancer-damaged eye. For a man used to working 12 to 14 hours a day, healing at home is not always easy.

Tomo’s wife nudged the longtime musician to expand his repertoire, so to speak. “Patty said to me, ‘Hey, why don’t you start building guitars?’”

She ordered a kit for Tomo to “make a playable guitar from a pile of parts,” as he described it. From that, Good Medicine Guitars was born.

Tomo is now making guitars and basses for veterans, people with cancer and cancer survivors. “One of my biggest salvations in cancer recovery is having my music,” Tomo said. “This is giving that gift of music.”

Do You Know Someone Who Needs CaringBridge

Do you know a current or former military service member who could benefit from starting a CaringBridge site to keep loved ones updated on their mental and physical health? If so, share this link with them: caringbridge.org/military-service.

Start a Personal Fundraiser to Help with Expenses

Tomo: Music for Me is the Best Medicine

Tomo: Fight with Every Ounce of Your Being 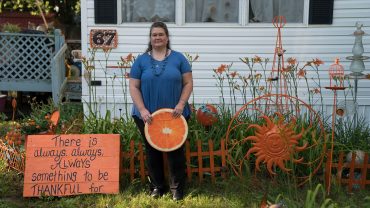 In Her Son’s Honor, Mom Finds the Good Within the Bad